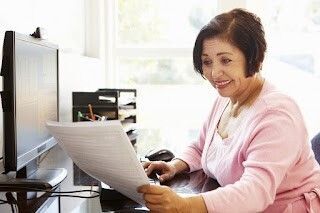 Nebraska Early Childhood Collaborative (NECC) offers its Business Training Series, developed by All Our Kin (AOK; a Connecticut based non-profit that supports Family Child Care), in English and Spanish, but, thanks to a new partnership, training for Spanish-speaking providers is expanding.

NECC, Wendy Knapp (Early Childhood Community Coordinator for the Hastings area), and Alexandra Dillon (Central Region Early Learning Connection Coordinator) teamed with Zyra Navarrete, who is a Bilingual Central Navigator for the area, to create a hybrid-style training for 11 Spanish-speaking providers in Hastings. Because the providers wanted to meet as a group in person, a hybrid format was developed, where Knapp, Navarette, and the 11 interested women are hosted at the United Way of South Central Nebraska, but the Spanish-speaking trainer, Claudia Zapata, presents via Zoom.

The group meets every Wednesday for the 10-week All Our Kin business training series, in which they “are taking a deep dive into the business side of running a childcare program,” as described by Brandee Lengel, NECC VP of Quality Child Care Partnerships. Both the training and all materials are provided completely in Spanish. The training looks closely at such topics as taxes, risk management, insurance, contracts, policies, and budgeting.

The training, according to Lengel, should increase the business acumen of the providers involved. While this group has only completed the pretest so far, previous groups have increased from a prescore of C to post-training score of B+ on average. Lengel points out that the providers should increase revenue after completing the Business Training Series through techniques such as new budgeting skills, increasing their time-space percentage, and finding more tax deductions.

There are other tangible benefits of the training as well. Providers are directed toward other resources offered to them in Spanish, particularly licensing toolkits that are available in their native language. In addition, NECC has offered the women the opportunity to discuss licensing and how the toolkits can benefit their businesses. One of the biggest benefits noted outside the actual training was the opportunity for the providers to network with each other and to connect to organizations that might assist them as they develop their businesses.

This then is a step forward in building the access that all Nebraska families need to find quality care. Lengel says, Ireydiza Gomez-Hall, (NECC bilingual specialist) will be going through AOK Business Training Series trainer certification in October, thus providing the ability to conduct more Spanish-speaking programs. In addition, another bilingual staff person has been recently hired by NECC, that can offer additional program support in Spanish. As training expands, so does the pool of providers who can offer quality care to Nebraska’s Spanish-speaking families.