Knowledge and Networking at Thriving 2022 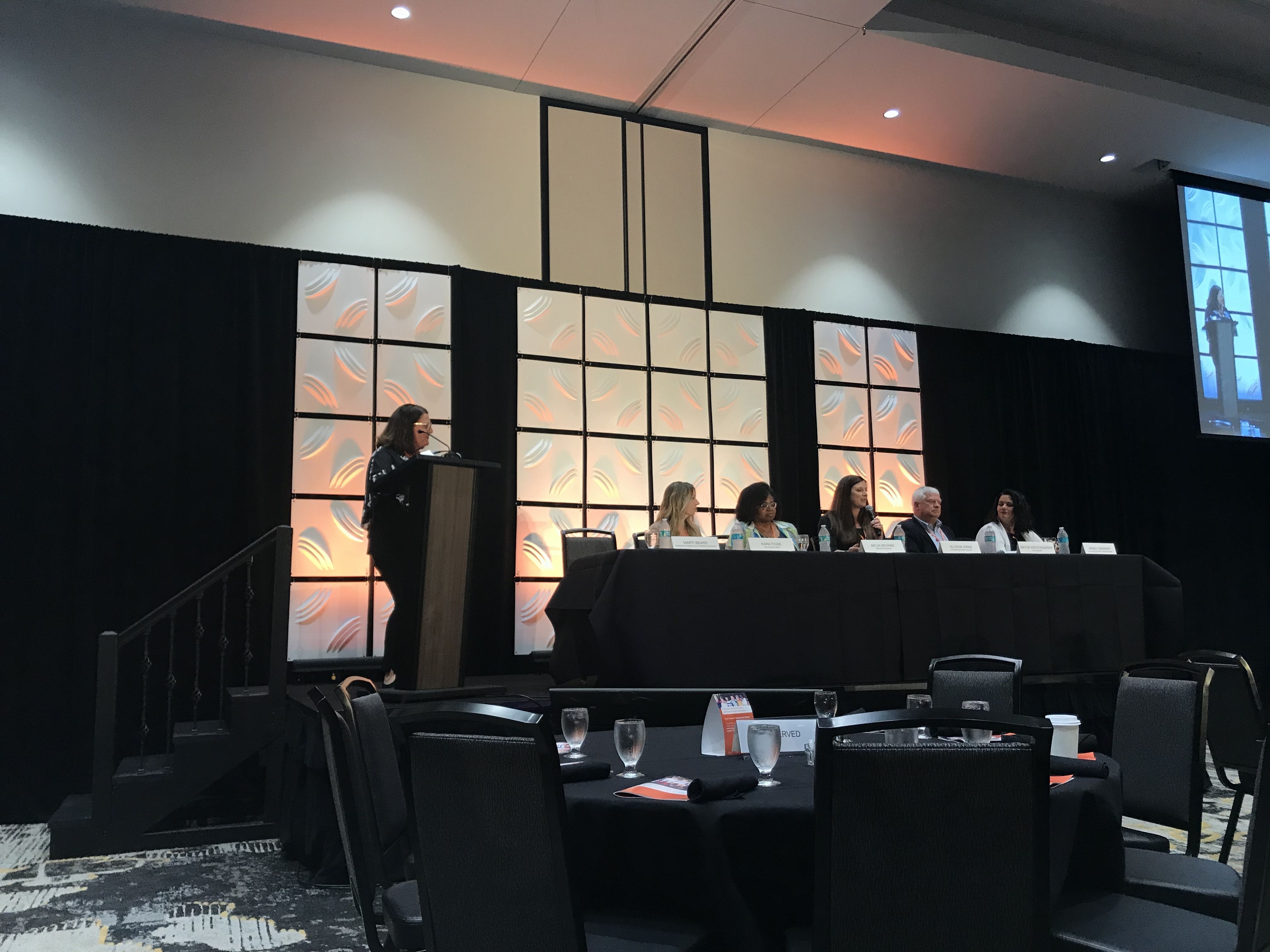 I don’t usually write newsletter articles in the first person; you know, reportorial distance, objectivity, and all that. But what better way to talk about experiential moments? We’ve been Zooming and Teaming and attending conferences in our little screen boxes for far too long now. It was thus refreshing to break out of my little video shell and attend the Thriving Children, Families, and Communities 2022 Conference in a space where I could see feet and arms and legs, where I could shake hands and exchange business cards, and, yes, where I could indulge in all those real-world conference extras like coffee and lunches and warm cookies, oh my!

There’s just something about meeting in person that creates an incubator for ideas, for learning and networking. Those brief hallway conversations grow, catalyzed by thoughtful panel presentations, into deeper lunch table idea exchanges, which transform in those post-conference weeks into collaborative actions.

As Senator Myron Dorn of Gage County said in his opening remarks, “If you’re not at the table, if you’re not out there presenting yourself, you will get left.” So Thriving 2022 was a chance for me, a chance for us all to present ourselves, our knowledge, our concerns, our hopes, and our desires to work together to build a better early childhood system.

Thriving 2022 was an international affair. Lisa Caudle, the Event Manager for Buffett Early Childhood Institute shared with me that six other countries were in attendance, including Russia, Rwanda, and the United Kingdom. What better stage then to discuss the current state of work with young children both locally and nationally. Samuel Meissels, the founding Executive Director of Buffett Early Childhood Institute said of Nebraska’s current post-pandemic outlook that 74% of the state’s families have both parents in the workforce and need affordable care. Yet, he went on to point out, “1 in 4 providers saw income reduced by half during the pandemic,” demonstrating the critical imbalance between demand and supply.  Combined with childcare closures, early childhood professionals seeking other employment, and a continued lack of a living wage and benefits, the state has reached a critical juncture in the work we do.

Keynote speaker, Dana Suskind, who is Professor of Surgery, Pediatrics, and Public Policy, a renowned advocate for young children, and author of Building a Parent Nation, addressed a national situation in which the U.S. is the only of 38 developed nations that does not federally mandate paid maternity leave, which leaves an astonishing one in four mothers returning to work only two weeks after giving birth. And yet the first two years of brain development, according to Suskind, are critical foundational periods of learning when “talking interactions build the growing brain.” She emphasized, “Our own society leaves them [children] on their own when children most need interaction.” Suskind set the tone for the rest of the conference when she explained that children need enrichment and that parents can best provide enrichment for their families when they are educated about early childhood issues.

From this call to action, we set off for the sessions that spoke to the work we do in Nebraska. While there’s no way to cover the entire day, the program was rich with the practical and the thought-provoking. In The Importance of Storytelling in Supporting Early Childhood Programs, for example, Nebraska Community Foundation’s Carrie Malek-Maldani, Michael Wunder, and Kira Geiger offered hands-on advice on the writing and photography skills that most effectively convey the narratives we create to promote early childhood work.

Later, in Increasing and Strengthening Diversity in Nebraska’s Early Childhood Environment, panelists shared their stories as a powerful demonstration of the need to find means for inviting more diverse voices into the early childhood field. Nebraska Children’s Aiesha Rahn put it succinctly, “I knew I was going to college but there was no one to speak into me what I was going to do.” UNO’s Ferial Pearson discussed the lack of academic mentors to encourage young people of color to pursue higher education and positions, which she termed, “the soft bigotry of low expectation.” She pointed out the impact of this on her own education when she talked of having her first Black professor in college. She said, “I didn’t know that professors could be Black.” There were a number of suggestions from panelists on how to reshape the system. Educare’s Quentin Brown noted that policy change was important while NDE’s Jene Chapman recommended partnering with businesses to create attractive compensation for people of color.

It was such fundamental policy changes that drove Opportunities for Early Childhood System Support. Panelists emphasized their desire to assist communities in working with the State and seeing them as helpers rather than enforcers. Nicole Vint, of DHHS, offered work with subsidy families as an example, noting the “extension of renewal for families to 24 from 12 months.” Melody Hobson of NDE explored possibilities for early childcare professionals, such as reducing the time it takes to become licensed, providing early childhood training centers, and revamping the “train the trainer” approach to better sustain virtual learning.

Although the sessions were important, it was only a part of the experience for me. Over the course of the day, I had conversations with organizational representatives from all over the state, discussed collaborative work with family-related initiatives, and got to speak with several parent advisors. I found myself discussing Social Media parenting with LaDonna Werth of the University of Nebraska Extension and planning a partnership to create content on the topic. I spoke with Sonia Coates of the Valentine Children and Families Coalition about how to best create meaningful content for a parent newsletter. And in one of the most impactful moments of the day for me, I listened to Parent Advisor Todd Schmeeckle talk about his experience of the conference, who said, “this gives me hope for my grandchildren.”

That was at the end of the day and that’s what I left with, a sense of hope. Knowledge, yes; knowledge that we are moving forward with a strategic plan and initiatives designed to assist families and to alleviate the strains on early childhood professionals. A new network, absolutely. And with that a growing sense that we can align state systems through collaborative work. But from the words of a father of 7 children, a man who fosters and adopts and tends to special needs, that simple sentence of hope. Isn’t that why we do this? We thrive when children and families succeed. We thrive when communities and the state work together. We thrive when we plant those little seeds of hope.