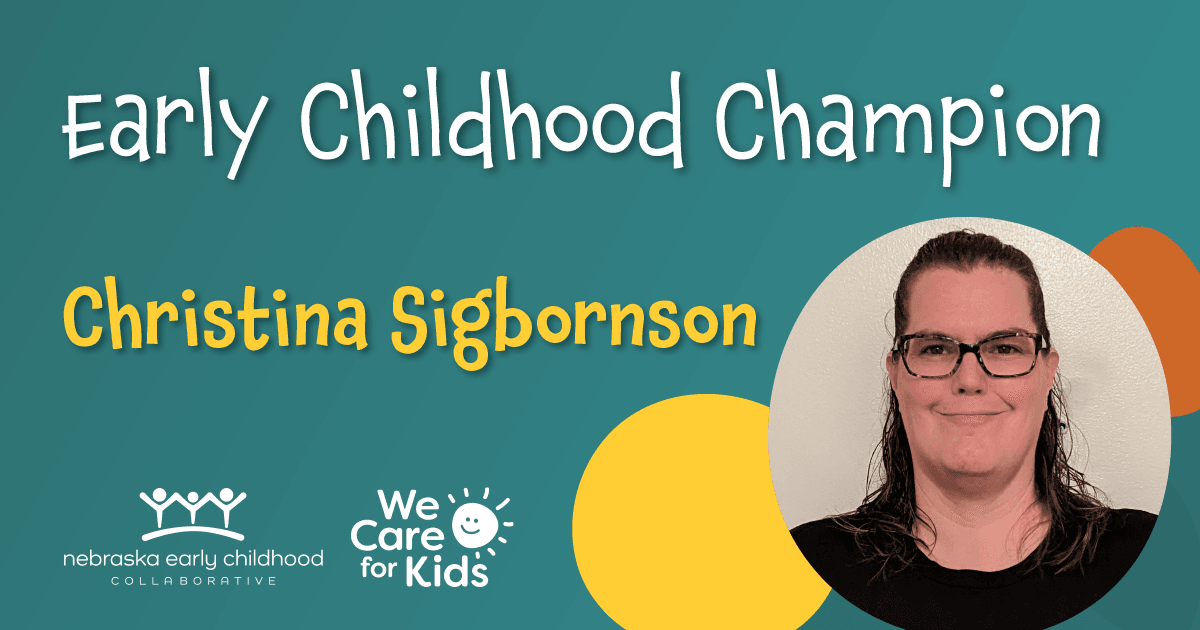 Christina Sigbornson knew from a young age that she wanted to teach but wasn’t sure with what age group.  Even though she thought it would be elementary students, she began working at a child development center while in college. That’s where her career as an early childhood professional began. In her 23 years in the field, she has earned an Associate’s Degree in General Education and is working toward another in Early Childhood for which she has received a T.E.A.C.H. scholarship. She is now an early childhood professional at the Hamilton Heights Child Development Center in Omaha, where she has spent 8 of her 10 years there working with infants.

And her story could have ended there like so many who work in early childhood care and education and who dedicate their days to caring for our youngest, developing important bonds, helping them toward milestones, and too often being overlooked for the crucial work they do. But a recent phone call changed Christina’s story. In November of 2022, she heard from Gina Ewing, the Quality Child Care Partnership Specialist at Nebraska Early Childhood Collaborative, who informed Christina she’d been chosen as an Early Childhood Champion.

In the summer of this year, the collaborative, led by NECC, began taking nominations from a wide range of people, including current and former parents, community members, fellow teachers, and school directors, who wanted to celebrate an early childhood professional. According to Tommy Greco of NECC, nominators were asked, “why they felt the nominee should be recognized as an Early Childhood Champion.” Nomination materials ranged from videos and photos to brief sentences and long stories, which, Greco added were “all very beautiful.” Materials were vetted by an outside selection committee composed of a group of experienced early childhood professionals described as “champions in their own right.”

The aim was to award 24 educators (12 from around the state and 12 from Omaha) the Early Childhood Champions title, which includes a plaque and a $1,000 stipend. The response was so quick and positive, with the committee receiving nearly 500 nominations, that the goal of awarding two educators each month (starting in October) for the coming year was fulfilled almost immediately and nominations were closed.

The hope is to continue the program into a second year and beyond to keep recognizing excellence in the early childhood profession. As Greco put it, “We want to reach providers from every corner of the state and all levels of the profession.” He adds that the goal of the award is “to reach the childcare providers who are working hard every day to support our families and communities and let them know they are appreciated.”

For Sigbornson the award was a surprise that definitely made her feel appreciated. She said, “receiving this award really made me realize people see me as a professional.” That is important since Greco notes another goal of the Champions program is to raise awareness of the critical role childcare plays in helping our communities thrive. By doing so, such initiatives elevate perceptions of the field to the professional status it clearly holds.

Sigbornson’s dedication to her work is apparent and she describes her “love of communicating with parents.” She explains that a lot of her parents are first-timers and don’t know exactly what’s normal or expected. She says that she enjoys guiding them through developmental milestones and sharing the joy of revelations like watching an infant roll over for the first time. And she clearly loves her infants too as she says, “how can you go wrong with baby snuggles!”

The Early Childhood Champion award, paired with We Care for Kids, furthers the goal of connecting partners and community leaders to families and resources in their community as well as building support for quality early childhood education in Nebraska. In other words, it builds both a macro and micro infrastructure that undergirds early childhood systems as professional career pursuits and forefronts excellence as a means of underscoring the need to offer those professionals the career supports and compensations they deserve.